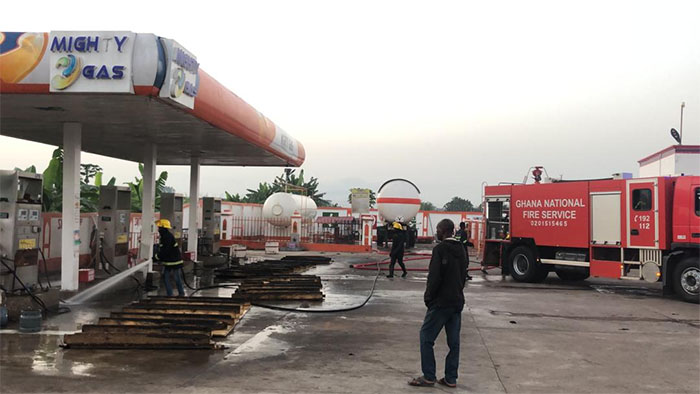 Three of the victims who suffered burns from the gas explosion at the Mighty Gas Filling Station in Ho last week have died.

The Public Relations Officer (PRO) of the Ho Teaching Hospital, Amos Jah who disclosed this said, the three are part of four persons who were being cared for at the Intensive Care Unit (ICU) of the Hospital.

He explained that the three persons who passed on between Monday, November 16 to Wednesday November 18, 2020, include two males and a female who were part of 14 victims brought to the hospital on the dawn of Wednesday, November 11, 2020 after the gas explosion had occurred.

Mr. Jah said, “As far as the Hospital is concerned 14 victims were brought here, thus 12 males and two females. I can’t tell if there were other victims sent to other facilities.”

Apart from the three fatalities, two other victims have also been transferred to the Greater Accra Regional Hospital for further care as the Ho Teaching Hospital is yet to have a Burns and Plastic Unit.

Nonetheless the rest of the patients in the hospital’s care are “being well cared for and monitored because we want to save lives,” the PRO assured.

Meanwhile, a source close to the family of one of the deceased has hinted that she was a mother of three. She had gone to the filling station that dawn to buy LPG for her bakery business when the unfortunate incident occurred.

Although the Ghana Fire Service who were swift in responding to the disaster is yet to give an official report on the explosion, a leaked CCTV footage of the incident shows the explosion may have emanated on taxi cabs parked at the gas dispensing point.

A source at the Mighty Gas Company Limited says improvements and repairs are being made to improve safety protocols at the facility to ensure incident free operations forthwith.

He added that the company is doing well to assist victims at the hospital to lessen the burden on them, particularly in the area of bills.

He was hopeful that the fire service and other regulatory bodies will finish their work and appraise them of the details accordingly.

He expressed the management’s sincerest sympathies to all injured and the general public of the sad event and wished victims a speedy recovery.

Defection to APC: You’re on your own – Ebonyi Senators, Reps reply Umahi