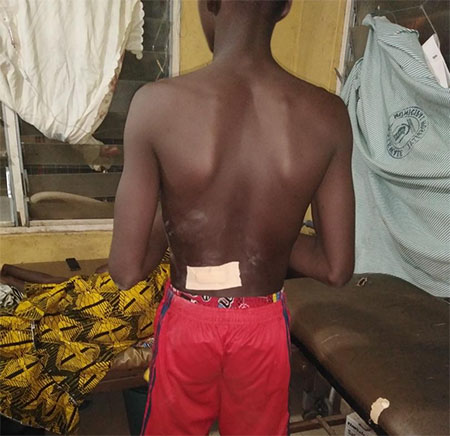 A 17-year old Mobile Money vendor at Walewale in the North East Region, Salifu Issah, has been shot by suspected armed robbers.

The victim sustained gunshot wounds on the waist and was rushed to Walewale Municipal Hospital for treatment.

The North East Regional Police Crime Officer, Supt. Reuben Yao Dugah, who confirmed the incident to DGN Online, said on November 15, 2020 at about 6:30pm , police received a distress call from one Hamidu Yakubu, a resident of Walewale that whilst he was at his provision shop near Walewale Vocational Technical Institute, three armed men all suspected to be Fulanis on a motor bike came to the shop and started firing indiscriminately into the shop and in the process a bullet hit the victim, Salifu Issah.

According to him, the suspected robbers succeeded in robbing the Mobile Money vendor of unspecified amount of money.

He said police proceeded to the crime scene but the robbers had fled as the time they got there, adding that gunshot marks were seen at the top of the store gate and one used BB cartridge was also found at the scene.

Supt Dugah indicated that police photographed the scene and the empty BB cartridge ammunition shell was picked for evidential purposes.

The crime officer disclosed that police visited the victim at the hospital and an inspection on victim revealed that he sustained a gunshot wound at the waist.

“The Police are making frantic efforts to identify who the culprits were for their arrest and investigations. The general public is hereby called upon to volunteer information to the police to curb these criminal activities in the communities.”

5 interesting mineral resources in Nigeria and states where…

Insecurity: Confusion persists over who is behind South-East…

Bandits: Only way to stop banditry is kill them all –…

Police rescue girl, 15, locked for 10 years by parents in…