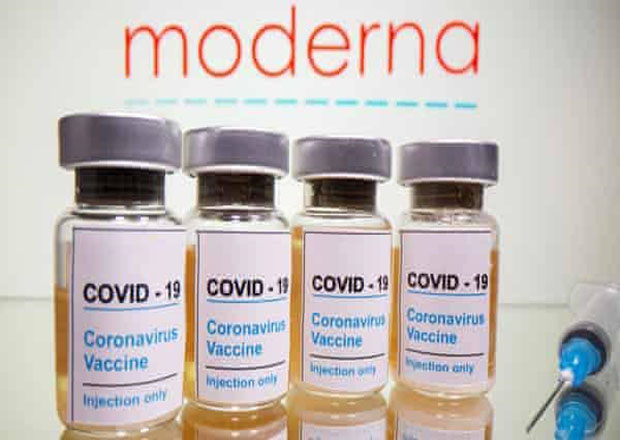 Moderna has announced that its vaccine has been found to be 94.5% effective against coronavirus.

The Moderna’s vaccine is still under clinical trial.

Moderna made the announcement on Monday, November 16, 2020, few days after Pfizer and BioNTech announced that their vaccine which is also under development was 90% effective.

According to Moderna, in its clinical trial, 15,000 study participants were given a placebo.

The placebo is a shot of saline that has no effect.

The company says after months of giving the participants the placebo, 90 of them developed coronavirus.

About 11 of the participants, according to the company, developed severe forms of coronavirus.

Additionally, 15,000 participants were given the vaccine. The company says only five of those participants developed coronavirus.

It says none of the five became severely sick.

According to Moderna, its vaccine did not have any serious side effects.

It revealed plans to apply to the US Food and Drug Administration for authorization of its vaccine immediately after it gathers more safety data in November.

The US is expecting the first batch of coronavirus vaccinations to begin by December 2020, with distribution scheduled for April 2021 as earlier announced by President Donald Trump.

We just announced that mRNA-1273, our COVID-19 vaccine candidate, has met its primary efficacy endpoint in the first interim analysis of the Phase 3 COVE study.
Read more: https://t.co/vYWEy8CKCv pic.twitter.com/YuLubU1tlx