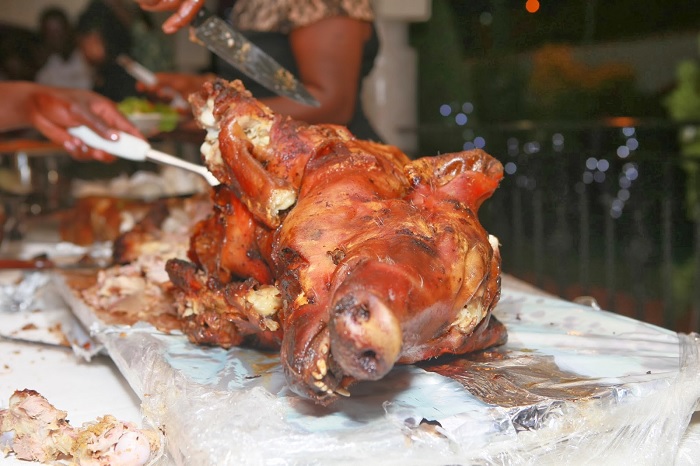 A TRAGIC incident that happened at pork joint at Kenyasi No.2 in the Ahafo Region has claimed the life of a 28-year-old man, George Adu-Gyamfi, last weekend.

The incident has thrown the whole community into mourning; while efforts are being made to arrest the suspect called Yaw Barima, who escaped after the callous act.

Information gathered by ‘DAILY GUIDE’ indicated that the two friends had been at loggerhead for some time before they met at the pork joint at a place called Kwadaso near Kenyasi No.2.

George first went to the spot and bought pork and kenkey, which he was eating when Barima arrived and went straight to cooking pot containing the meat and started stirring the soup in the pot.

George allegedly asked Barima to stop the stirring of the soup since it was being sold to the public.

Barima allegedly became offended and retorted with abusive words, leading to hot exchanges between the two but those around the spot separated them.

Not satisfied that they were separated, Barima angrily went home and came back with a kitchen knife and threatened to kill George who also had left the place after eating.

Barima allegedly then traced George to his area and stabbed him several times below the right chest leading to his death.

‘DAILY GUIDE’ learnt those who witnessed the stabbing had wanted to arrest Barima but he threatened to ‘kill’ anyone who got closer to him.

He then escaped into the bush in the process and had since not been found.

FROM Daniel Y Dayee, Kenyasi No 2

Over 50 die of ‘strange disease’ in Kogi – Lawmakers