DVLA Grabs IT Use Award 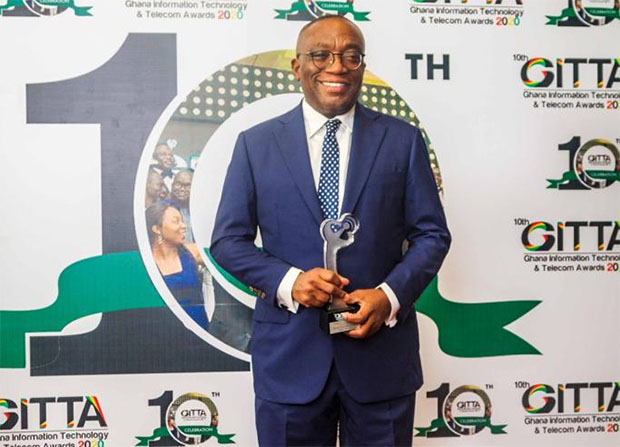 At the same function, the Chief Executive, Kwasi Agyemang Busia, received another prestigious award as the Public Sector ICT Chief Executive Officer (CEO) of the Year, for his courage and consistent leadership in the use of technology to transform the image of the DVLA.

A citation accompanying his award highlighted Mr. Busia’s outstanding career in Information Technology (IT) and his leadership which has brought about distinctive ICT transformation in operations and culture at the DVLA.

This award brings to 27, the number of awards received by the Authority in less than four years. The Chief Executive was adjudged the Public Sector ICT Man for three consecutive years – 2018 – GITTA awards, 2019 – CEO of the Year (CEO Network) and 2020 – GITTA.

In an interview after the awards, Public Relations Manager of the DVLA, Mr. Francis Tuffour, expressed gratitude to the Minister of Transport and all stakeholders of the Authority for their collective effort and support in actualising DVLA’s strategic plan and vision towards improving their services and management.

He also praised the Board Chairman and management for the drive to make DVLA a world-class organisation with acceptable standards for driver and vehicle licensing.

Mr. Tuffour emphasised the CEO’s focus on making customer service the centre of their operations and management’s visionary operational framework of SEED which stands for System Integration, Enforcement, Entrenchment and Data Analytics.

He also mentioned the ongoing digitisation of vehicle records since 1995.

Other awards received by the Authority in the last three years include the ICT Service Delivery and Information Award; Gold, Best Government Website; Silver, Best Government Use of Social Media (Citizen Engagement); Most People Focused CEO of the Year (Public Sector); Emerging HR Innovation of the Year Award (Public Sector) DVLA, Most Innovative Public Sector Institution, as well as best in Policy & Administrative Reforms (Ghana Integrity Initiatives (GII)) among others.

GITTA is a prestigious award programmed with its sterling status earning the ‘Oscar Awards’ for excellence in Ghana’s ICT sector.

Prampram Youth Fired Up For Season